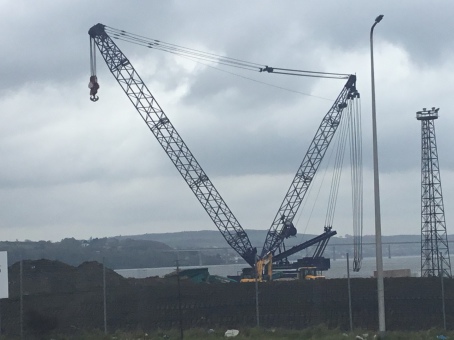 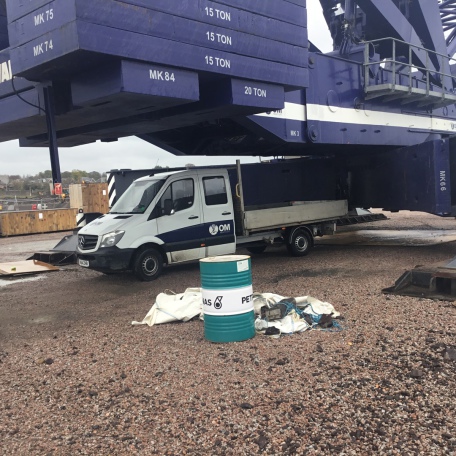 OM Lifting service vehicle below the Gttwalds Ballast, it emphasises the size of the crane. the weight of each segment  of ballast is now shown clearly. 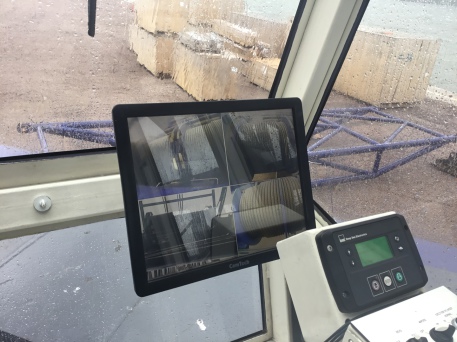 One of the new panels with technical operataing details installed in the operators cab. 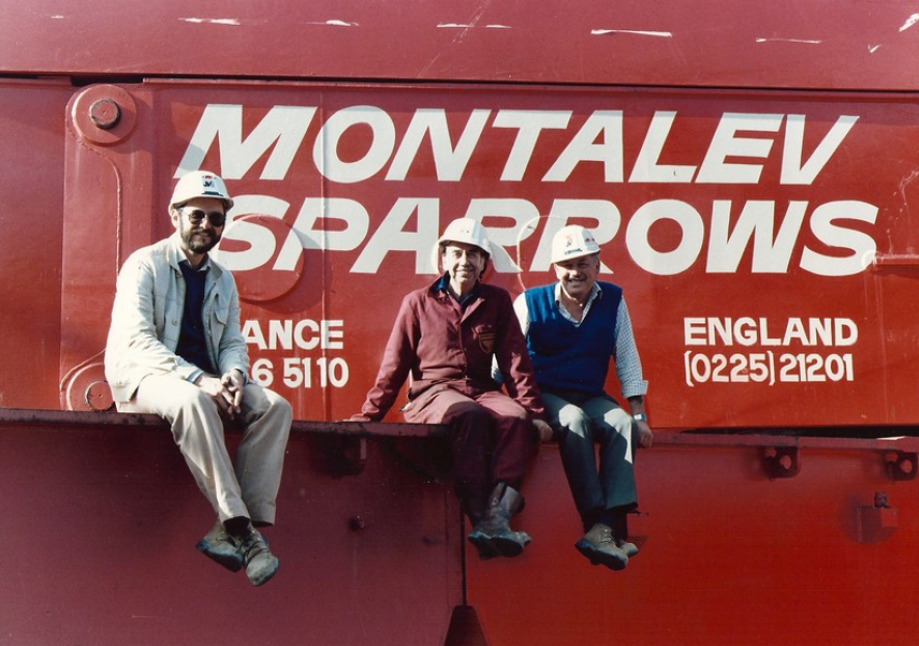 Received this picture from Ken Cross the project manager for Sparrows at Marsden Point in New Zealand, the thtree are sitting on the outrigger of the 1000tonnne Gottwald, Ken is on the left with Norman Small the crane operator centre and on Normans right is Dave Stockman, Kens heavy lift supervisor. 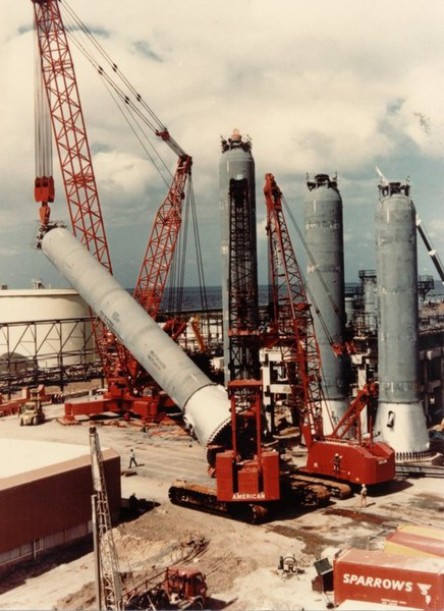 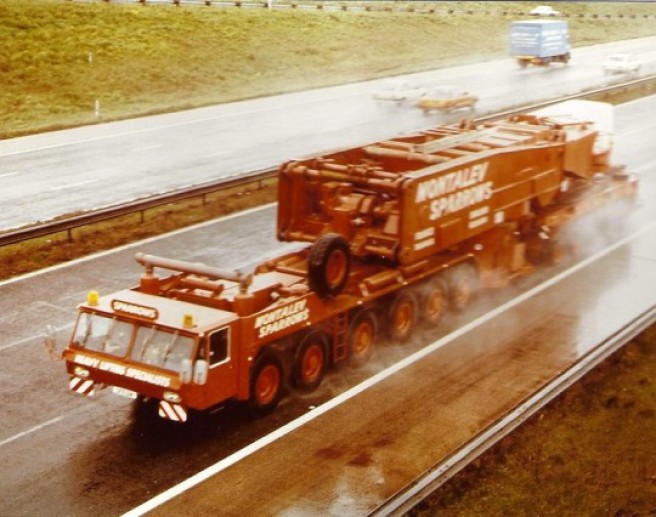 The 1000 tonne Gottwald in travel mode en-rute to Birkenhead. Dave Barnaby, Barry Midren, Jim hagan with Contract Services all involved in this project, the contract was won by Frank Sumsion. 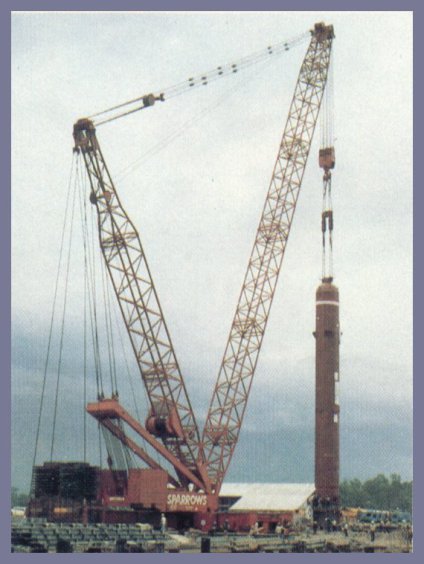 The Gottwald 1000 tonne crane on its first project in Indonesia, Barry Mildren worked on this project. 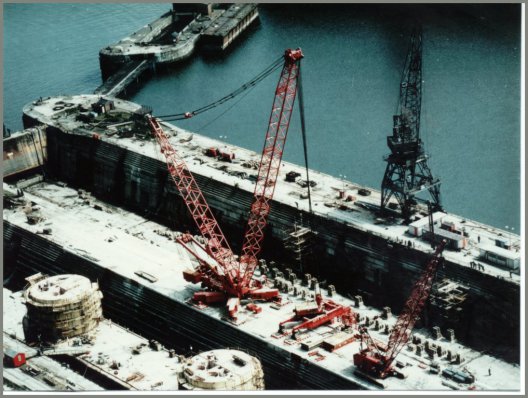 The 1000 tonne Gottwald at the start of the Cammel Laird contract, Birkenhead 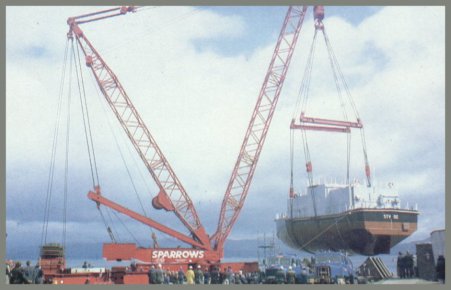 tHE Gottwald 1000tonne crane at Greenwich, George Brown worked on this project.

Discovering via the internet that Sparrows old Gottwald MK1000 was at OM Heavy Lift Dundee; I made contact with the new owners and was told that the crane was now Diesel Hydraulic and officially tested and rated at 1500 tonnes capacity.

I felt the change was fascinating and justified (Health permitting) a trip to Dundee.

I contacted Alex Fyfe, the owner and Managing Director of OM and gave him some history of the crane, and asked if it was possible to visit his site at Dundee to view the crane, Alex was very pleased to hear that there was still interest in the crane and said “come anytime” I accepted his offer.

I contacted George Brown and told him that I was making a visit to Edinburgh and whilst I was in Scotland would he join me on a visit to Dundee, George met up with me and we travelled in his car to meet the new owner and of course see the crane.

Sadly, at the time of our visit the crane was off the heavy lift pad and partially de-rigged, but it was still a very interesting visit. The crane looked almost brand new in its new livery.

The new owner’s OM Heavy Lift based in Forfar and Dundee specialise in lifting services to the oil and power related industries.

At Dundee Port,OM Heavy Lift with the Gottwald MK1500, now have the largest permanently sited quay side crane in the UK. Its scale is such that with a 58m boom and superlift it can lift 875 tonnes from the centre of a barge or vessel.

Heavy crane capability is also considered to be a significant attraction for offshore wind developments in the medium term, 2020 and beyond.

OM Heavy Lift owns and operates a fleet of cranes;

OM Heavy Lift purchased the Gottwald from Holland and Jim Deas* their Maintenance Supervisor visited the crane in Holland to assist with the de-rigging and transportation of the crane to Dundee.

Alex Fyfe the owner of OM, Mike Roberts, operations manager and Jim Deas decided that they would refurbish the crane, the diesel electrics were completely stripped out and the Mercedes main power source was replaced with a new Cummins engine, the crane was converted to diesel hydraulic.

The crane was then tested and painted in OM Heavy Lift livery (blue and grey).

We are informed that to date OM biggest single lift with the crane has been 350 tons, Sparrows first heavy lift in the UK with the Gottwald MK1000 was 540 tons at Greenock**, and 740 tonnes at Hartland point in New Zealand. I feel sure that OM Heavy Lift will beat Sparrows record very soon.

Mike and Jim both made us feel very welcome and we are already starting to plan our next trip when the crane will be rigged and working.

** George worked with Bob MacGrain and Brian Piercy, (Engineers from Sparrows Contract Services) and the Ministry of Defence to obtain this order for Sparrows.

Apart from George and Jim’s keen interest in the Gottwald they also found that both of them were classic car enthusiasts, George has his own collection that includes a 1996 Bentley, he has promised me a ride in it when I return to Scotland.

George also gave me a wonderful surprise when he drove through the gates of “Gleneagles” and treated me lunch at the golf club. It was an emotional time for me, bringing back memories of past days spent here with Sparrows as guests of Barry Barnes of Demag. Happy days, words fail me, thank you George, you are a true friend.

The Old Gottwald in a new dressing 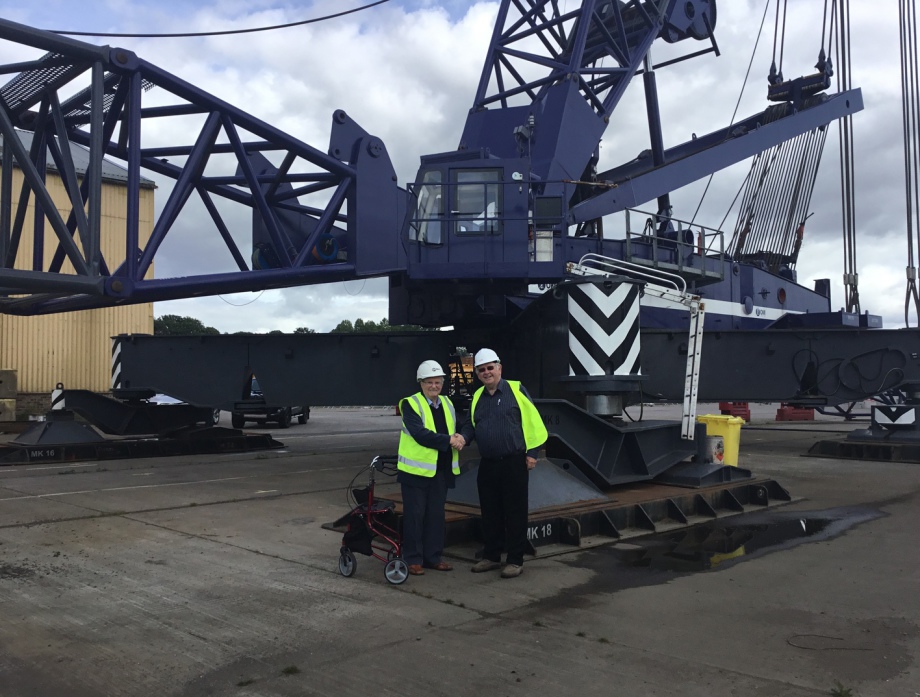 Frank Sumsion with George Brown at Dundee, we were the guests of OM Heavy Lift the new owners of the Gottwald 1500. 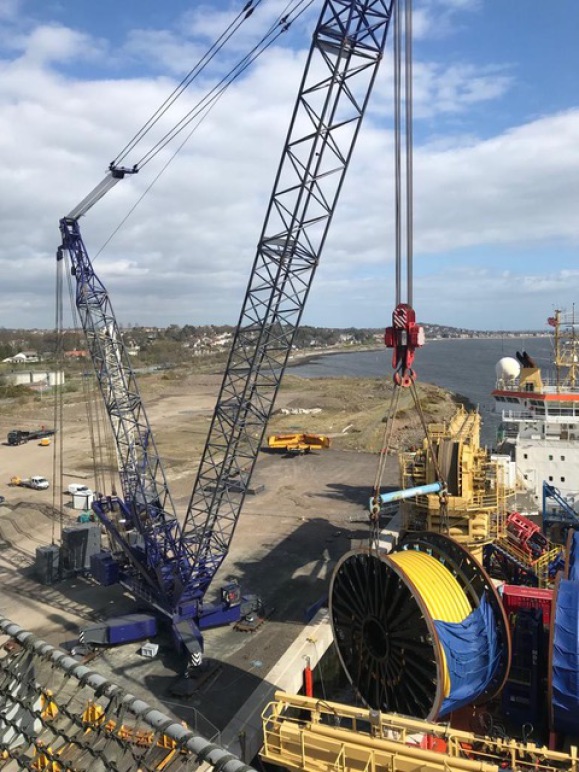 The Gottwald MK1500 with superlift  working in Dundee.